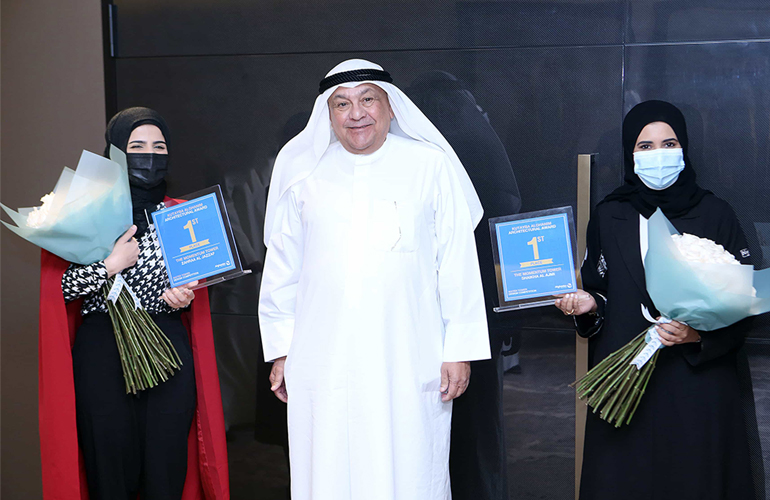 The competition was open to Kuwaiti architects and designers under the age of 30, based in Kuwait or abroad, including students. Competitors were asked to redesign a 44-meter tall water tower, located within Alghanim Industries’ Shuwaikh Automotive Complex. Originally built in 1966, the tower is out of service today.
A pair of Kuwaiti architects, Sheikha Al Ajmi and Zahraa Al Jazzaf, won the first-place prize of $10,000 for their “Momentum Tower” design.  Amina Al-Qabandi and Noura Al-Subaie won the second-place prize of $5,000 for their “Tubery” design. Dana Al-Mathkoor won the third-place prize of $3,000 for her “Light Tower” design.

The Momentum Tower design will radically transform the tower and the space around it, creating seven levels of mixed-use recreation and co-work space, capping the tower with a platform that offers 360 degree views of Kuwait City.

Reflecting on the experience, Sheikha Al Ajmi said: “We thought the idea of reimagining an out of service water tower was very unique. Preserving the construction rather than demolishing it was a fun challenge. There was a lot of room for creativity. We are also very happy to see a private sector organization actively supporting young professionals in this way.”

“I look at these winners and I see a very bright future for our country,” said Sir Kutayba Alghanim. “Their work is creative, functional and beautiful. Reviewing it, I can’t help but think of my father, who built the tower in 1966. For him, water towers were a symbol of Kuwait’s progress – a symbol of our promise as a nation. These young architects and designers honor that legacy and they point us to the future again. I am thrilled to support their work and look forward to many future rounds of this prize.”

Kuwait, 06 April 2022: Alghanim Industries, one of the largest privately owned companies in the region, participated in a major annual donation drive in collaboration...

Kuwait, 28 March 2022: Alghanim Industries, one of the largest privately-owned companies in the region, recently added a higher-end Safat Home boutique to Kuwait city@s...